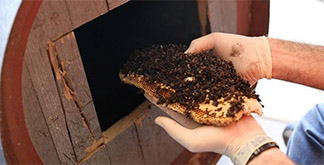 A wine barrel used as a table on a Hyde Park family’s verandah has been revealed as the latest home for Asian honey bees in Townsville.

Biosecurity Queensland officers working on the Varroa mite eradication response were alerted by the home owner last week, after she noticed bees entering a small hole at the side of the barrel.

The home owner had received a mailbox flyer from Biosecurity Queensland, so she knew to call on 13 25 23 to report the bees.

The house is just one street away from a previous Asian honey bee detection.

The home owner allowed Biosecurity Queensland officers to take the wine barrel back to the Garbutt facilities to extract the nest.

The inside of the wine barrel revealed a cache of around 5,000 Asian honey bees and a well-established feral nest with a number of queens. It is estimated the bees could have called the wine barrel home since late last year.

There were no varroa mites found in the nest or on the bees.

This latest detection is a reminder that Asian honey bees can be present in quite large numbers and still be relatively hard to find.

Biosecurity Queensland is asking Townsville residents to keep reporting bees on 13 25 23, whether it is a swarm, nest or a couple of unusual bees.

Varroa mites have been found on Asian honey bees at Townsville Port and Annandale. Varroa mites have the potential to significantly damage the Australian bee industry, disrupting honey production and pollination services.