All beekeepers, from commercial operators, to backyard enthusiasts, to people starting up their first hives, form part of the honey bee industry. Each and every beekeeper has a role to play in protecting honey bees from established and exotic pests.

Incorporating recommended biosecurity processes into day-to-day operations is the best way to protect individual beekeepers, regional biosecurity and the Australian honey bee industry as a whole.

Biosecurity is the protection of livelihoods, lifestyles and the natural environment, all of which could be harmed by the introduction of new pests, or through the impact of pests already established in Australia.

Biosecurity is a national priority, implemented off-shore, at the border, on-farm or in an apiary. Biosecurity is essential for a successful beekeeping business.

Australia’s geographic isolation has meant that we have relatively few of the pests that affect honey bee industries overseas. Freedom from these exotic pests is a vital part of the future profitability and sustainability of Australia’s honey bee industry. Biosecurity preserves existing trade opportunities and supports new market negotiations.

What is honey bee biosecurity?

Implementing honey bee biosecurity is essential for a beekeeper’s business. If an exotic or endemic pest establishes in an apiary, business costs will increase (for monitoring, cultural practices, additional chemical use and labour), productivity will decrease (yield and/or colony performance) and markets may be lost. The health of the honey bee industry also ensures the continued success of many other plant industries that rely on honey bees for pollination.

Early detection and immediate reporting increases the chance of an effective and efficient eradication.

The biosecurity measures of an individual beekeeper can be enhanced by collaborating with others in a particular region. Through this collaborative approach, biosecurity threats to all apiaries in a region can be minimised.

Promotion of honey bee biosecurity at the regional level can be enhanced through the engagement of the community and by understanding the area’s vulnerability, and the potential source and nature of threats. Neighbouring apiaries (managed or abandoned), feral colonies and/or unregistered hives are examples of potential biosecurity threats.

Regional biosecurity efforts are strengthened by identifying what resources and expertise are available, and by having a commitment from stakeholders to implement biosecurity measures and surveillance programs.

Video about The Code of Practice

Victorian Bee Biosecurity Officer Ally Driessen has recorded a video on the Code of Practice. This video is part of a broader series on B-Qual (Introduction and B-Qual Audit levels), which is available on YouTube. 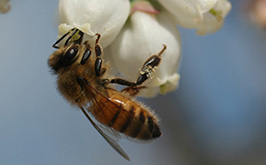