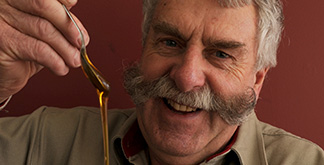 Plant Biosecurity Farmer of the Year Award finalist, Lindsay Bourke, is on his way to the awards dinner.

Beekeeper Lindsay Bourke, who owns and runs Australian Honey Products, has bred bees that clean out their brood nest at the whiff of a pest or disease.

Lindsay is a finalist for the Plant Biosecurity Farmer of the Year Award, sponsored by Plant Health Australia. He manages 3,600 hives for honey production and the pollination of crops in a vital partnership with farmers.

Lindsay works in the field as a beekeeper and manages the day to day operations, packs product for sale and is on numerous committees and industry panels, including as former chairman of the Australian Honey Bee Industry Council. He is driven by biosecurity for his business, as this ensures the best quality honey is produced and his bees provide the best possible results for pollination dependant crops.

“Biosecurity is essential for maintaining the beekeeping and food industry now and in the future,” Lindsay said.

He is always working to improve some aspect of biosecurity for his business or the industry more generally. Recently he has been breeding bees that may be more resistant to the effects of pests and diseases that may threaten his business in the future.

“Hygienic behaviour is a genetic characteristic that bees can inherit. Bees that have the genes can smell disease and pests in their brood nest and remove the affected cells before the problem spreads,” he said.

Bees that show hygienic behaviour against Varroa mite and American foulbrood (a pest that is already in Australia), the two biggest biosecurity threats to the industry, can be tested, selected and bred.

It is likely that Varroa will arrive in Australia, with an estimated loss of 50-70 per cent of pollinating hives. The impact on pollination for farmers and food security will be significant. But establishing apiaries with increased hygienic behaviour in the bees will lessen the impact when that happens.

With the assistance of Jody Gerdts from Bee Scientifics from the USA, 45 hives were assessed from across his apiaries. A number of lines that averaged 96 per cent on a scale of hygienic behaviour were selected for a breeding program. Three hives even returned exceptional results of 98-99 per cent.

Lindsay carried out all of the assessments, and he has passed on this training to his team of beekeepers, expanding the program across the entire business.

According to Lindsay, the more hygienic stock has also resulted in more honey and greater yields than expected for a pollinated carrot crop.

The biosecurity advice from Lindsay is: “Never underestimate the potential impact of Varroa and American foulbrood disease. Invest heavily now in biosecurity for your future and that of the farming community.”

The winners in each category of the Farmer of the Year Awards, hosted by Kondinin Group and ABC Rural, will be announced at a dinner in Sydney on 9 September 2015.