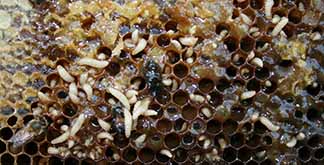 Fermenting slime isn’t exactly attractive to us, but it’s one of the many odours being tested in lures aimed at keeping small hive beetles out of bee hives as the pests start to move around over summer.

Small hive beetles are estimated to cause millions of dollars in losses to beekeepers in Australia each year as they spread across the east coast of Australia, feeding on bee larvae and turning honey into a smelly, fermented slime.

Field trials are currently being conducted by a team from the Department of Agriculture, led by Dr Diana Leemon. It’s funded by the Honey Bee and Pollination R&D Program, a partnership between the Rural Industries Research and Development Corporation (RIRDC), Horticultural Innovation Australia Limited and the Australian Government, along with the Wheen Bee Foundation and the Queensland Beekeepers’ Association.

Beekeeper and Program spokesman James Kershaw says developing a synthetic odour that attracts the beetles to a trap instead of hives would provide many benefits to the industry.

“There are existing treatments once you have beetles inside the hive, but this project is trying to keep them away in the first place,” Mr Kershaw said.

“Various odours have been successfully tested in the lab. The trick will be to make them strong enough to work outside, more attractive than whatever draws the beetles to the hives, and long-lasting enough to be practical.

“If we can get it right, beekeepers could lay traps a few days before they bring in their hives, to get rid of any small hive beetles in the area.

“It could also provide a way to monitor beetle numbers in specific areas, and to detect them as they advance across the country – and into new countries like Europe and New Zealand, which have so far managed to remain largely unaffected.”

These had varying levels of success in capturing beetles – near honeybee hives and native bee hives and in locations away from any known hives – which has helped to narrow the number of compounds being tested.

For more information about small hive beetles and their management, go to the BeeAware website