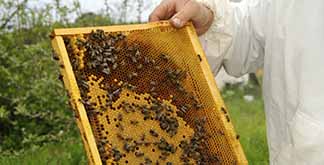 Australia’s first national survey of honey bee viruses has found we have one of the healthiest honey bee (Apis mellifera) populations in the world – a key step in re-establishing and maintaining export markets for breeding stock.

The last survey was conducted almost 30 years ago and only in eastern Australia, and the significant gaps in our knowledge prompted the US to prohibit imports of Australian queens and packaged bees due to fears they could spread unwanted viruses.

Researchers have now used molecular tools to screen 1,240 hives representing 155 apiaries across Australia for 10 honeybee viruses, as well as using hive inspections at each apiary and molecular testing to monitor the spread of non-viral pests and diseases.

The project was conducted by the CSIRO, led by John Roberts, and funded by the Honey Bee and Pollination Program, a partnership of the Rural Industries Research and Development Corporation, Horticulture Innovation Australia Limited and the Australian Government.

Beekeeper and program spokesman, James Kershaw, said that as well as informing our markets, the findings would help with better management of hives at home.

“Slow paralysis virus and deformed wing virus are major concerns for the industry globally, and Australia can now claim ‘freedom from disease’ with respect to both as they were not found in the survey,” Mr Kershaw said.

“It’s now important to protect this status with biosecurity systems that will help to ensure these viruses are not introduced through imported honey bee stock.”

The survey confirmed the distribution of viruses and other pathogens already known to be present in Australia, such as Nosema ceranae, European foulbrood and chalkbrood.

“As an industry, confirmation of just how widespread some of these pathogens are, has highlighted the need to give higher priority to improvements in their management as they have a significant impact on productivity.”

“In the future, we also need more research to provide better information about how different management options impact the levels of Nosema and various other viruses, as well as their impacts on honey bee health.”

For more information about the identification and management of bee pests and diseases already present in Australia, go to www.beeaware.org.au/pests.