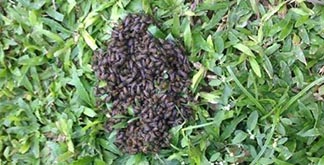 Asian honey bees can be anywhere, not just in trees, but on the ground, in down pipes, letter boxes, garden sheds and other man-made structures.

Biosecurity Queensland has not found any varroa mites on a new swarm of Asian honey bees which were collected at Hyde Park on Friday.

Dr Ashley Bunce, Director, Varroa Mite Response said this detection came about thanks to a call from a member of the public.

“It’s great that the Townsville community is being so vigilant and reporting feral bee sightings to us,” he said.

“Our inspectors responded immediately and were able to collect most of the swarm, including the queen.

“The site where the bees were found in Hyde Park is in a direct line between the previous finds at the port of Townsville and Annandale, so we know we’re concentrating our surveillance efforts in the right area.

“While we have not found any mites on these particular Asian honey bees, we cannot be complacent. Asian honey bees carry varroa mites which present a real threat to the honey bee industry and plant industries that rely on bees for pollination.

“Surveillance is continuing in the immediate area around the Hyde Park detection in case there are more Asian honey bees in the area.

“Asian honey bees can be anywhere, not just in trees, but on the ground, in downpipes, letterboxes, garden sheds and other man-made structures.

“To date, testing of pellets collected by the Birdlife Townsville group from rainbow bee-eater birds at various roosting sites has not shown any sign of Asian honey bee activity. This is further good news.

“Examining the pellets from these birds is a surveillance method used to detect the presence of Asian honey bees within the feeding range of the birds.”

Dr Bunce said after a month of intensive surveillance, two nests and this swarm of Asian honey bees had been identified.

“We now have 12 contractors with bee keeping experience working with our surveillance teams which is allowing us to cover more ground,” he said.

“The varroa mite response began after a feral Asian honey bee hive was found last month at the Port of Townsville.

“There are restrictions on the movement of bees, bee hives, bee products (excluding honey), and used bee keeping equipment from the Townsville area to prevent any possible spread of the mite.”