This update from South Australia’s Bee Biosecurity Officer Teagan Alexander gives an overview of her main activities since late 2019. 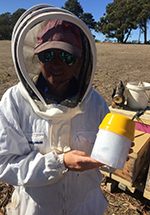 Across South Australia various compliance issues have cropped up including holes in boxes, unregistered hives, exposed materials and unmanaged hives. The number of weak or dead hives on lucerne showed the stresses of the season with heatwaves and poor queens creating no end of trouble for those participating in pollination activities.

I conducted several inspections between November and March in an effort to identify and eradicate American foulbrood (AFB) infected hives in thirteen apiaries belonging to three different commercial beekeepers. Another inspection was conducted with a new commercial beekeeper to ensure that they started with a clean bill of health. I also undertook other inspections for beekeepers (hobby and commercial) concerned they had AFB present in their hives. Thankfully, they were free from AFB.

During this period I have worked with both the South Australian Apiarists Association (SAAA) which represents commercial beekeepers and Beekeepers’ Society of South Australia (BSSA) which represents hobby beekeepers. For example, I have written articles for their newsletters on wrap-up of almond pollination, managing weak hives, sugar shake month, and endemic pests and diseases. I also regularly attended BSSA meetings and participated in an impromptu Q&A session during one meeting. In late December, I attended the SAAA Strategic Planning meeting and, in January, I attended a meeting of the Central Branch of the SAAA. I also attended a number of SAAA Executive meetings, and where I was unable to attend, I emailed through dot points of my activities instead.

Bushfires wreaked havoc on beekeepers throughout the Adelaide Hills, Lower South East and Kangaroo Island in December and January. In response, the SAAA organised a nuc replacement program for mainland beekeepers. Members of the SAAA kindly donated nucs to those who lost hives due to the fires. A number of us came together to honey test the donated nucs so that they could be distributed with a clean bill of health to the recipients.

In early January, I was also seconded for two days to work in the PIRSA Bushfire Response Call Centre to call livestock producers and apiarists impacted by the bushfires.

In November, along with Bob Beer from the BSSA, I conducted a morning and afternoon pest and disease workshop for hobby beekeepers covering AFB identification and management, other bee pests and diseases, a sugar shake demonstration and how to properly inspect brood. November also saw the SAAA hold their annual field day in Gawler where I presented a talk on registration requirements and what to do in the event of finding AFB in a hive.

In February, I travelled to Naracoorte to run one-on-one BOLT Biosecurity for Beekeepers training sessions for four beekeepers with computer literacy issues.

Modelled on the workshops I run in conjunction with the BSSA, I travelled to Port Lincoln in early March to run a pest, disease and compliance workshop for hobby beekeepers with Norman Pope from the SAAA.

Engagement in the face of COVID-19 restrictions

In response to COVID-19 restrictions I have been exploring new ways of providing extension materials. I created a video on pests, diseases and compliance exclusively for BSSA members. The video was provided via their Facebook group in lieu of a talk I was meant to present at one of their meetings and two planned pest and disease workshops that were to be held in mid-April.

I have regularly responded to web and telephone enquiries from beekeepers and the general public, including many senior high school students who have chosen bees as their research topic.

Due to the increased workload of our apiary administration team member as a result of legislation changes to registration renewal requirements I have also been assisting with data entry.