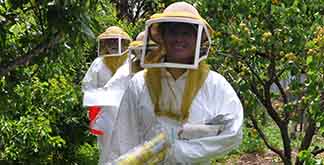 Bee Biosecurity Officers have been busy over the last few months, taking part in Exercise Bee Prepared, as well as compliance and surveillance operations, and going to industry meetings and field days.

Encouraging beekeepers to follow best management practices for diseases like American foulbrood continues to be a major focus. The officers are also talking to beekeepers to help them understand their obligations under the Australian Honey Bee Industry Biosecurity Code of Practice, which is now in place across the country.

In August, a peak time for almond pollination in north west Victoria, Agriculture Victoria held Operation DeadOut. PHA’s bee biosecurity coordinator, Dr Kath DeBoer attended the large-scale apiary pest and disease surveillance exercise, which primarily looks for signs of American foulbrood in hives brought into the area. Any infected hives that are found are destroyed or the equipment sterilised by irradiation (under the Livestock Disease Control Act 1994) to prevent further spread of the disease as hives are moved from one crop to the next providing pollination services.

The National Bee Pest Surveillance Program continues to be rolled out with apiary officers in all states and territories working to set up remaining sentinel hives and catch boxes at ports selected for surveillance. Sentinel hives are healthy hives of European honey bees that are inspected regularly for exotic pests. The plan is to have the remaining surveillance at port sites up and running in the next few months as the weather – particularly in the southern states – becomes more amenable for hive management activities.

A major focus of apiary officers over the coming months is the collection of bee samples from sentinel hives. These bee samples will be tested by CSIRO, looking for honey bee viruses currently not found in Australia (eg acute bee paralysis virus).

You may notice apiary officers out and about carrying butterfly nets. Sweep netting of flowering plants is being used at many sea and air ports as a way to potentially capture exotic foraging bees like giant honey bee.

It’s a busy season coming up: with temperatures starting to rise so does bee activity. If you notice any unusual bees please call the Exotic Pest Hotline 1800 084 881.