However, the Cape honey bee has a distinct reproductive system which makes it unique amongst other races of Apis species. This unique reproductive system causes major problems for beekeepers in its natural environment of South Africa where it acts as a ‘social parasite’. 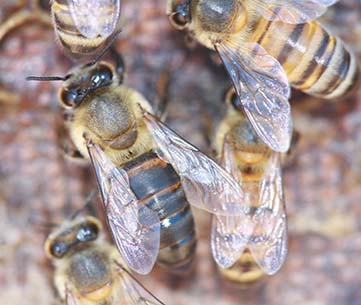 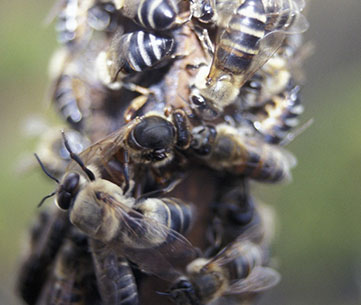 In a typical European honey bee colony, the simplified reproduction steps outlined below occur. When a queen bee lays an egg, she can control whether the egg is fertilised or not fertilised. If she lays a fertilised egg, this egg will become a worker bee or queen bee (both female). If she lays an unfertilised egg, this egg will become a drone (a male bee). This type of reproduction is called haplo-diploid because the queen bee can lay either unfertilised male eggs (haploid) or fertilised female eggs (diploid). Worker bees also have ovaries but they are unable to mate. However, worker bees are still able to lay eggs, but since their eggs cannot be fertilised then worker bee eggs can only become drone bees. The presence of a healthy and laying queen in a colony suppresses egg laying by worker bees.

Cape honey bee pictured next to a queen cell in which worker-laid eggs are clearly visible (inside the white circle). Ben Oldroyd, University of Sydney

In a European honey bee colony, the queen may die for a variety of reasons. To counter the loss of the queen, workers may begin to nurture a young larva that was laid by the now deceased queen, and hopefully raise her as a replacement queen by feeding her royal jelly. However, this sometimes is not able to happen and the colony is not able to re-queen itself, and then collapses. Before the colony perishes, and without the queen to restrict laying worker bees, worker bees begin to lay haploid offspring which become drones. These drones are viable and act as the last chance for the colony to pass on its genes.

The offspring from a laying Cape honey bee worker is therefore a type of clone, genetically identical to their mother.

Interaction with other Apis species 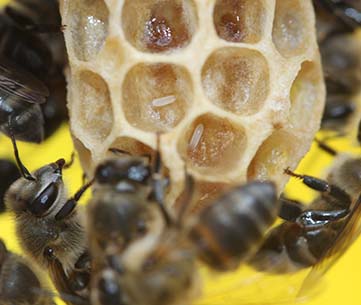 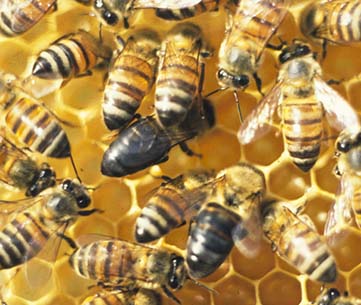 The Cape honey is only present in South Africa.

The Cape honey bee is not present in Australia and there are strict quarantine requirements in place to protect the Australian honey bee industry. If you think you have seen Cape honey bees, call your local department of agriculture or the exotic plant pest hotline on 1800 084 881.

An additional fact sheet and journal articles have been included below. To learn more about the life cycle and biology of this pest, click on the links below: