Sacbrood virus is caused by a virus in the Iflavirus genus. The virus mostly affects worker larvae, but can also infect adult honey bees. Sacbrood virus causes an uneven brood pattern with discoloured, sunken or perforated cappings scattered throughout the brood. Larvae are thought to be infected by consuming brood food contaminated with Sacbrood virus. The virus then multiplies within the infected larvae, which cause the larvae to sit in the cell with their heads raised and causes the larvae to die shortly after capping. The skin of the larvae then gradually becomes a fluid filled sac. The Sacbrood virus may remain viable in dead larvae, honey or pollen for up to four weeks.

Sacbrood virus is present throughout most of Australia and its incidence is generally higher during the brood rearing season when the colony is under stress from a shortage of nectar or pollen, unfavourable climatic conditions or a poorly performing queen bee. 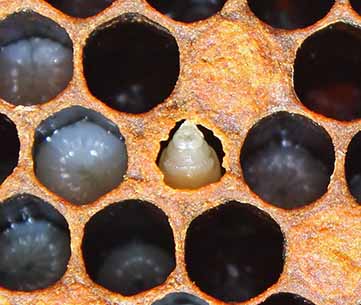 Larva affected by Sacbrood virus with its head raised in a banana shape and stretched out on its back in the cell, with healthy larvae around. Rob Snyder, www.beeinformed.org 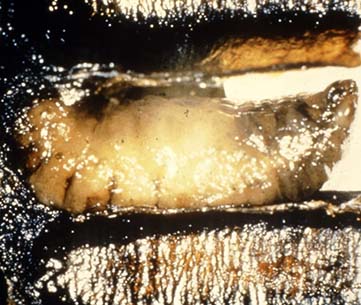 Sacbrood virus is most damaging and obvious when larvae are affected. The disease cycle for Sacbrood virus affecting larvae is as follows: 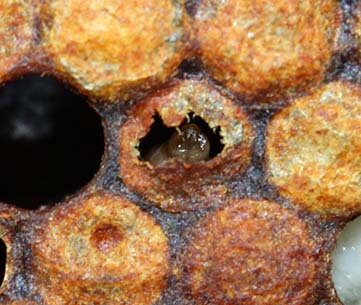 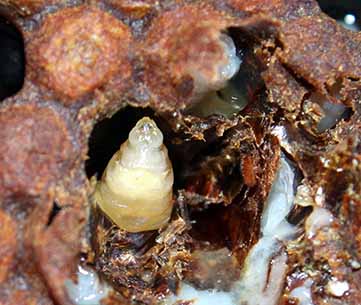 Infections of Sacbrood virus can occur at any time of the year but are most common during the brood-rearing season (from around September to February, depending on the location).

Sacbrood virus affects the brood causing an uneven brood pattern with perforated cappings. This can be confused with other brood diseases such as European foulbrood (EFB), American foulbrood (AFB) and Chalkbrood disease. Some distinct symptoms and indicators of these similar pests include:

During an infection of Sacbrood virus the larvae dies with its head characteristically raised toward the top of the cell, its skin hardens and it becomes a fluid filled sac, which dries to become a brown-black scale that is brittle but easily removed from the cell.

The ropiness test can be performed by pushing a matchstick into the infected individual in the cell. When the match is slowly withdrawn, in the presence of AFB or EFB, the semi-fluid remains could be drawn out in a 2-5 cm long ropey thread.

For more information on these pests, see their respective pest pages.

Sacbrood virus can be spread in a number of ways. The virus may remain viable in larval remains, honey or pollen for up to four weeks. Sacbrood virus can also be accidentally moved by beekeepers or via the natural behaviour of honey bees. Beekeepers can potentially spread the virus between hives by accidentally moving infected hive components from an infected hive to a non-infected hive, or through the movement of infected hives to different regions. The virus can also spread naturally. For example bees robbing infected food sources or drifting from infected hives can potentially spread the virus. Swarms can also contain individuals carrying the virus, which can allow the virus to spread to new areas. 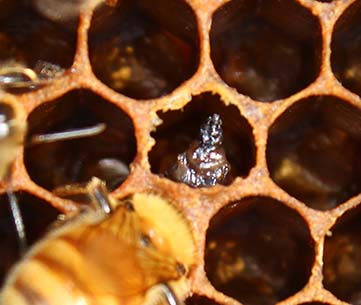 Once in a colony the virus is able to infect larvae and adults. Nurse bees become infected by ingesting the virus while removing infected brood or by feeding on contaminated food sources. The virus is then spread to larvae while the nurse bees are feeding them. Larvae infected with the virus will die before pupating.

Adult bees that ingest Sacbrood virus become infected but show no obvious symptoms. Infected adults usually do not work as nurse bees for long and become foragers at a young age. For the most part infected workers will not collect pollen, but any pollen that is collected will be contaminated with the virus. Young adult (less than 8 days old) bees that ingest contaminated pollen can then become infected with the virus.

Varroa mite (which does not occur in Australia) has also been shown to spread the virus overseas.

Sacbrood virus occurs worldwide. In Australia Sacbrood virus has been reported in all states and territories, except for the Northern Territory.

Honey bees are usually able to control Sacbrood virus in most colonies through hygienic behaviour and the ability to detect and remove infected larvae. However, Sacbrood virus can become severe when combined with other stresses, such as a shortage of nectar or pollen, unfavourable climatic conditions, a poorly performing queen bee or infestation with other pests and/or diseases. When these conditions occur, beekeepers should take measures to restore the colony’s population through adding to the worker bee population, or by providing sugar syrup or pollen.

Beekeepers can protect their hives by regularly inspecting for signs of the disease. If Sacbrood virus is detected in more than 5 per cent of the brood re-queening should be considered. Infected brood combs should be removed and either melted or placed in storage for two or more months (as the virus is relatively short lived in the absence of bees). This will remove the virus from the hive and the new queen bee should be able to replace the brood. As a precautionary measure, brood combs should also be replaced every 3-4 years by beekeepers.

Honey bee stocks can also differ in susceptibility to Sacbrood virus, so beekeepers should replace the infected colony’s queen bee with one supplied by a reputable breeder. This variation in susceptibility is due to differences in the hygienic ability of the honey bees, which influences their ability to detect, uncap and remove the infected brood. By selecting queen bees or obtaining honey bees from hives that show this trait, the effects of Sacbrood virus can be further reduced.