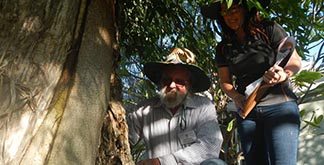 A small army of bee hunters has taken to the streets of Townsville searching for any signs of Asian honey bees, the hosts of the parasitic varroa mite.

Varroa Mite Response director Ashley Bunce said Biosecurity Queensland was leading the eradication effort with support from industry following the discovery of varroa mites in a nest of Asian honey bees found at the Townsville Port in late June.

“A second nest of Asian honey bees with a single varroa mite were discovered in Annandale last week,” he said.

The nest was destroyed and the bees were confirmed as Asian honey bee, with one varroa mite (Varroa jacobsoni) found in the comb.

Genetic testing has confirmed that the Annandale Asian honey bees and the mite are related to those from the Port detection.

“We now have 12 additional surveillance officers with bee keeping experience, working with our Biosecurity Inspectors scouring parks, streets and other public land for any signs of feral bees,” Mr Bunce said.

“There’s also been a fantastic response from the Townsville public wanting to assist in eradicating varroa mites, and anyone with beekeeping experience who wishes to be part of the surveillance effort should contact us on 13 25 23.

“We’re very grateful to the Birdlife Townsville group which is doing its bit by collecting the pellets of Rainbow bee-eater birds at roosting sites at Annandale, Anderson Gardens and the Townsville Common.

“Examining the pellets from these birds is a surveillance method used to detect the presence of Asian honey bees within the feeding range of the birds.”

Mr Bunce said the success of any response to a pest or disease outbreak was highly dependent on the cooperation of the affected industry and the local community.

“We’re asking commercial and hobby beekeepers to check their hives and report any signs of mite activity to Biosecurity Queensland on 13 25 23,” he said.

“The community can also help by reporting feral nests so that they can be checked and destroyed.”

Information about bee biosecurity, hive care, and photos that will help you identify varroa mite is here.

More information on Asian honey bees, their appearance and associated symptoms once infected with varroa mites is available online at biosecurity.qld.gov.au, or view the varroa mite pest alert.

Reproduced from a biosecurity alert issued by Biosecurity Queensland.