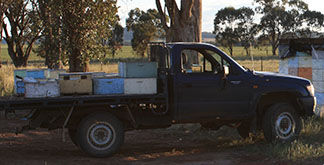 Restricting the movement of hives could have a significant impact on the production of fruits, vegetables and nuts if it happened during pollination season

Restricting the movement of hives would be the best way to stop the spread of an exotic pest of honey bees – but could have a significant impact on the production of fruits, vegetables and nuts if it happened during pollination season.

This is one of the main findings from a simulation exercise carried out to investigate how prepared Australia is for an incursion of Varroa mite, which has devastated honey bee populations elsewhere around the world.

Workshop Acari tested likely scenarios that would follow a detection of Varroa, including introducing quarantine zones, checking hives and destroying those infected with the mite, and movement restrictions for bees and equipment within a zone or state, and between states. Both government and industry stakeholders took part in the exercise.

Plant Health Australia ran the workshop as part of the Honey Bee and Pollination Program, a jointly funded partnership with the Rural Industries Research and Development Corporation, Horticulture Innovation Australia Limited and the Australian Government.

Since research funded by the Program shows ports are a likely entry point for bee pests, the scenario was the detection of Varroa mite in sentinel hives at the Port of Melbourne, picked up by the National Bee Pest Surveillance Program.

Program spokesman and Almond Board of Australia Industry Development Officer Brett Rosenzweig said many plant production industries took part, in recognition of their reliance on pollination by honey bees for crop production.

“There’s a limited timeframe for pollination to occur, and in the almond industry more than 70 per cent of hives are brought in from outside producing areas. The workshop scenario showed movement restrictions at a critical time would dramatically affect producers.”

The workshop highlighted the importance of early detection in limiting the spread of Varroa, the need for horticultural and pollination-dependent industries to contribute to the National Bee Pest Surveillance Program, and the need for increased awareness among growers of the potential risks to their business of bee pests.

Mr Rosenzweig said that working through the effects of a hive standstill has made the implications for pollination-dependent crops much clearer.

“A key recommendation was that movement restrictions will have to be reviewed frequently if an incursion occurs, to make sure they’re only in place when and where necessary. Effective communication about them will also be vital for reducing the impact on our industry.”