Varroa mite eradication team in it for the long haul 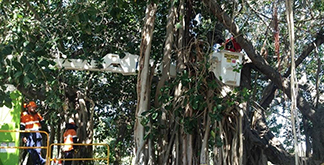 The campaign to rid Townsville of varroa mites is now being funded nationally, with a dedicated locally-based varroa mite eradication team being established in Townsville.

Minister for Agriculture and Fisheries and Minister for Rural Economic Development Bill Byrne said the establishment of the National Varroa Mite Eradication Program would ensure a continuing long-term effort to protect Australia from these significant mite pests.

Asian honey bees infested with varroa mites were first detected at the Port of Townsville in June this year. Biosecurity Queensland implemented a movement control area to help prevent the spread of the mite. This area has now been extended to cover all of the Townsville City Council local government area.

Since June, ten Asian honey bee nests and swarms have been destroyed and a small number of varroa mites were present in two of these nests.

National cost-shared funding of $2.6 million will ensure that the National Varroa Mite Eradication Program will run for the next three years, with two key staff leading the effort.  There are currently 23 staff engaged on the program.

Minister Byrne said it had been a very effective response to date, and he thanked all involved for their efforts.

“I’d also like to thank the local community and bee keepers for their support,” he said.

“We have received more than 200 calls from the community and I urge everyone to remain vigilant and keep reporting bees to us, as we are still finding Asian honey bees in the Townsville area. The hotline number is 13 25 23.”

Varroa mites have the potential to significantly damage the Australian agricultural sector and the bee industry, disrupting honey production and pollination services.

If you see any suspect bees, or feral bee nests in the Townsville area contact Biosecurity Queensland immediately on 13 25 23.

To date there have been ten detections of Asian honey bees in Townsville with varroa mite found on two of the colonies.

Information and photos that can help you identify Asian honey bees and varroa mites.

See the DAF website for information about the Prevention and Control Program, restrictions on the movement of bee, bee hives or any other product containing live bees from the Townsville area.