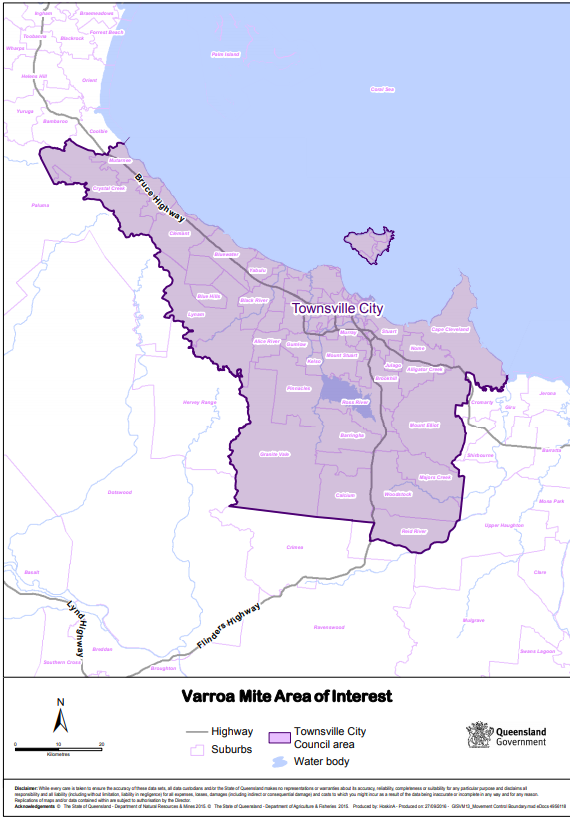 A map of the affected area.

Varroa mites have been detected on an Asian honey bee nest that was recently found and destroyed at the Port of Townsville.

The nest was located on 16 May 2019 as a result of bee lining activities where foraging bees are tracked.

Combs and bees collected from the nest were sent to the Brisbane Biosecurity Science Laboratory where suspect varroa mites were formally identified.

CSIRO’s laboratory in Canberra has confirmed the species as Varroa jacobsoni.

A national eradication program has been in place since the detection of varroa mite on Asian honey bees at the Port of Townsville in June 2016. No Asian honey bees
associated with the 2016 detection have been found since November 2016.

Genetic testing of bee material from the May 2019 detection at the Port indicates this is a new incident, with these Asian honey bees likely to have arrived recently from
Papua New Guinea (PNG) or the Solomon Islands.

The Asian honey bee is approximately 10mm long with yellow and black stripes on the abdomen. Heightened surveillance continues around Townsville Port and within
a 15-kilometre radius.

Port and transport workers are encouraged to be on the look-out and report suspect bees that may have come in on cargo via the See. Secure. Report hotline
on 1800 798 636.

Information about bee biosecurity and photos that will help identify varroa mite are available on the BeeAware website or the Queensland Department of Agriculture and Fisheries website.

Acknowledgement: This article was reproduced from a Biosecurity Alert by the Queensland Department of Agriculture and Fisheries.