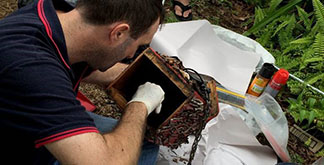 After two weeks of intensive surveillance this is the only new hive of Asian honey bees to be located. Photo: Biosecurity Queensland

Laboratory examinations of an Asian honey bee hive found at Annandale this week have confirmed the presence of varroa mites.

Biosecurity Queensland’s Dr Ashley Bunce, Director, Varroa Mite Response, said initial examinations found no mites on the bees, but a single mite had today been identified within the comb taken from the hive.

“The hive was in a residential yard about nine kilometres from where the previous hive was found at the Port of Townsville,” he said.

“As a result of this confirmation, we are now increasing our surveillance activities in and around the Annandale area.

“By the end of this week, we expect that laboratory testing will confirm whether there are any more mites and if the Asian honey bees found at Annandale are related to the original hive found at the Port of Townsville.

“We continue to urge local residents to check their yards and let us know if they see any bee activity.”

Dr Bunce said the current varroa mite response was initiated after a feral Asian honey bee hive was found last month at the Port of Townsville.

“Those bees were carrying a small number of varroa mites which present a real threat to the honey bee industry and plant industries that rely on bees for pollination,” he said.

“While these mites are not the more serious Varroa destructor, we are taking this incident very seriously and putting every effort into ensuring they are eradicated.

“There are currently restrictions on the movement of bees, bee hives, bee products (excluding honey), and used bee keeping equipment from the Townsville area to prevent any possible spread of the mite.”

If you know of feral bee hives in the Townsville area, or see Asian honey bees or suspect your bees have been affected, call Biosecurity Queensland on 13 25 23.

Information about bee biosecurity, hive care, and photos that will help you identify varroa mite is here.

More information on Asian honey bees, their appearance and associated symptoms once infected with varroa mites is available online at biosecurity.qld.gov.au.

Reproduced from a biosecurity alert issued by Biosecurity Queensland.