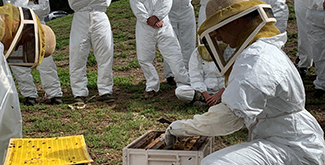 Agriculture Victoria’s apiary team increased the national award-winning State Quarantine Response Team (SQRT) in early March this year. Training was delivered to 25 new field team leaders (authorised Agriculture Victoria staff) and 35 industry members/beekeepers who wanted to help protect the industry from incursions of exotic bee pests. The SQRT program proved its worth when varroa was detected in the Port of Melbourne in June 2018.

For those not familiar with SQRT training, it’s designed to equip participants with the skills to conduct in-hive surveillance in the event of a suspect incursion (eg varroa mite) and participate in the government’s emergency response. The pool of industry members and beekeepers has now risen to more than 180 trained individuals.

Industry members and beekeepers were taken through important aspects of the SQRT training, including:

Although the day’s agenda was tweaked to allow for unfavourable weather conditions, overall feedback was positive.

Training participant Tony said beekeepers generally could work in a vacuum, so it was great to share a day with so many other people and to gain a deeper understanding of biosecurity measures in practice.

Beekeeper Krista said she enjoyed the training and felt it equipped participants with the necessary skills and attitude to support the SQRT program into the future.

The role of the SQRT members is extremely valuable to Agriculture Victoria and the industry as it provides a large pool of trained in-hive surveillance experts confident in handling bees ready to be called on as part of a honeybee emergency response.

If you would like to be part of the next SQRT training please email [email protected] and express your interest.

For anyone who is currently not part of the SQRT program, you can still be involved in early detection of an incursion of varroa by conducting a sugar shake test. And remember, if you see anything suspicious (like varroa mite or braula fly) please call the Exotic Plant Pest Hotline on 1800 084 881 immediately.