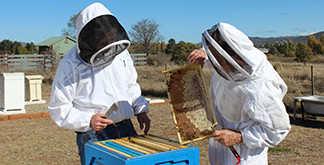 Public assistance is an essential part of the hunt for varroa mite, which was first detected in an Asian honey bee nest at the Port of Townsville in June 2016.

“We have had excellent support from local beekeepers and the wider Townsville community since we started our eradication and surveillance activities, and we are once again asking people to report anything unusual to us as bee activity becomes more prevalent,” Biosecurity Queensland’s National Varroa Mite Eradication program leader Steve Anderson said.

A legislated prevention and control program for varroa mite started in December 2016. Movement restrictions, which apply to live bees, bee hives or any part of a bee hive that may contain live bees, are still in place and prohibit these items leaving the Townsville City Council area.

Varroa mites are an exotic pest of bees that can have a detrimental impact on bee hive health, honey production and pollination services. The exotic pest Asian honey bees are the natural host of Varroa jacobsoni, however the mites have recently been observed reproducing on European honey bees at some overseas locations.

Asian honey bees are approximately 10mm long with yellow and black/brown stripes on the abdomen. They are smaller than European honey bees, which are 15mm in length.

Mr Anderson said his team had been systematically walking the streets of Townsville looking for bee activity and feral bee nests, as well as using newly developed bee attractant techniques, including balloon surveillance.

Balloon surveillance, which involves large helium filled balloons tied to string that contains bee attractant, will be used around the Port of Townsville during the summer months.