The Almond Board of Australia represents the biosecurity interests of almond producers and the industry.

The domestic market for almonds continues to grow strongly at around 10 per cent per year due to an increasing move to plant-based diets and the health benefits of nuts. The industry has focused on export market development, with three tonnes of almonds being shipped overseas for every tonne consumed in Australia. Historically, India has been the largest export market, but sales to China continue to increase rapidly, making it the major destination for Australian almonds.

The industry has been expanding rapidly since 2016 with an additional 20,000 hectares being planted, bringing the total industry orchard area to 50,000 hectares. The orchards are concentrated along the Murray Valley in Victoria (53%), SA (21%), and NSW (24%), with an orchard in WA (2%).

The 2019 production was 104,000 tonnes, however when current plantings reach full maturity the industry’s productive capacity will be approximately 160,000 tonnes.

Nonpareil continues to be the most popular variety with several pollinator varieties such as Carmel, Price and Monterey planted to overlap the flowering period of Nonpareil to achieve good nut set.

The Australian almond industry depends on honey bees for pollination with more than 200,000 hives required during the pollination season. The almond blossoms provide one of the first natural sources of food for bees each spring. 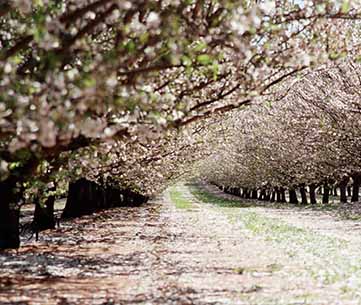 Almond orchard in bloom. Almond Board of Australia

Pollination of almonds (Prunus dulcis) is very important. With the appropriate number of  pollinators, such as managed hives, almonds can commonly receive between 90–100 per cent nut set, which form into ‘nutlets’. However, the resulting yield at harvest time is always much lower. This can be due to a range of factors, such as excess rain, poor nutrition etc. which causes the tree to abort some of the nutlets.

Almonds are one of the earliest crops to flower in the spring (August). The flowers have five petals, and a single stigma surrounded by a ring of anthers. They open before the tree produces leaves. The flowers produce both nectar and pollen. While the ovary contains two ovules, only one ovule normally develops into a seed and produces a fruit. The stigmas are usually receptive as soon as the flowers open. Almonds are generally not self-fertile and pollinisers must be planted, however new self-fertile varieties are now becoming available. Pollination is a significant factor affecting crop yield.

A wide range of insects visit almond flowers to collect pollen and nectar including flies, bumble bees (not present on mainland Australia) and honey bees. Honey bees are the most important pollinators because they can be managed and introduced to a crop. Because almonds flower early in the spring, in many situations they may be the only crop flowering in an area. Although this has the advantage there are fewer flowers surrounding the crop that may draw bees away from the almonds, it also means almonds are often open in cooler conditions, which may reduce honey bee activity. Anything that can be done to site honey bee colonies in warm sheltered positions may encourage them to forage in colder conditions. Research also indicates higher fruit set rates are achieved when hives are placed in smaller placements and spread evenly across the orchard, rather than larger placements placed less often. 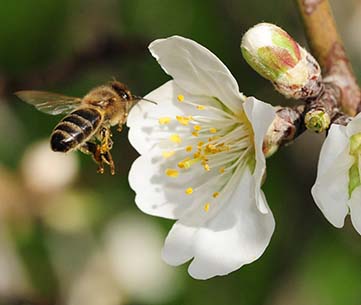 For many crops it is recommended hives are not introduced until about 10 per cent flowering; however, colonies can be introduced earlier to almonds when there are few competing flowers around the orchard. Even if there is competition, a few hives should be introduced at the start of flowering to ensure the early flowers are pollinated. With the relatively high fruit set required and the large numbers of flowers on the trees, fruit set often declines quickly as with increasing distance from a polliniser. Honey bees will mainly forage on a single tree and if they leave this they are most likely to move to the next tree in the same row. It used to be common for polliniser rows to be every third row; however, it is now recommended to plant them every second row.

Because of the flower shape, pollen gatherers are likely to be better pollinators than nectar foragers. Many nectar foragers collect nectar from almond flowers without touching the stigma. Pollen gathers have a greater chance of contacting the stigma, as they scramble over the anthers to collect pollen, so there is a high frequency of contact with the stigma. Managing colonies so they have a high demand for pollen may assist pollination.