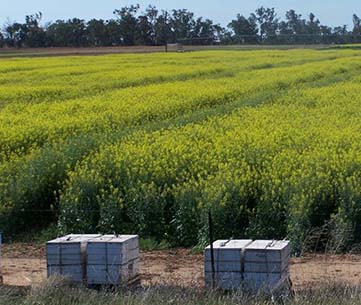 Most of Australia’s grain is produced across the region known as the wheat belt, which stretches from central Queensland through NSW, Victoria, Tasmania, SA and southern WA. Due to the wide-ranging soil types and climatic variability across Australia, a range of crop species and varieties are grown, each of which has specific pests and diseases that pose a threat to production and can influence access to markets (both domestic and overseas).

Grain Producers Australia represents the biosecurity interests of grain producers and the industry.

Crops such as wheat, oats and barley are self pollinated and receive no benefit from insect pollination.

Rye and maize cross pollinate, but pollen is carried largely on the wind.

A variety of other grain crops, such as field peas, safflower, lentils, lupins, sorghum, soybeans and other oilseed grain crops such as linseed, flax and linola have been shown (in limited studies) to receive some benefit from insect pollination. However, other grain crops such as canola, sunflower and faba bean have consistently been shown to have a significantly higher quality and quantity of crop produced when honey bee pollination occurs, and for this reason, the following information will focus on these three crops.

Canola is an oil seed plant belonging to the Cruciferae family (Brassicaceae) which is grown in winter throughout the wheat belt areas of temperate Australia. Canola blossom is frequently one of the earliest floral species available to commercial honey bees in the southern areas of Australia, flowering from September to October. Canola can be of benefit in the management of honey bees; however it can lead to hives swarming and honey obtained from canola crops tends to candy very rapidly, sometimes presenting the beekeeper with an un-extractable product.

The flowers are in racemes of canola at the top of the plants. They usually have four petals, six stamens and a style. Four of the stamens are longer than the style and two are shorter. The flowers have nectaries at the base of the stamens. Although the flowers are self-fertile, seed set is improved with cross pollination. This can occur through wind pollination but seed set is generally accepted to be improved with insect pollination. The importance of honey bee pollination does, however, appear to vary with variety. 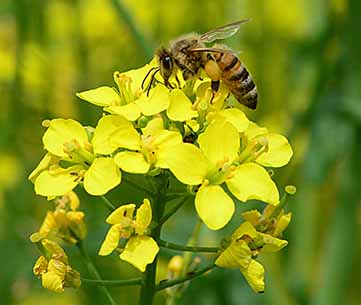 Pollination is an essential step in the seed production of canola, Brassica napus. It is achieved with the assistance of various pollen vectors, but particularly by the honey bee, Apis mellifera. The canola flower has an entomophilic structure that attracts honey bees through copious supply of nectar and pollen, although the production of both depends much on the individual cultivar. Honey bees have remarkable qualities as pollinators when it comes to foraging flowers. First, they can easily adapt to different plant species, thus they can visit a large diversity of flowers throughout the season. However, when they locate an entomophilous plant, the bees develop fidelity towards it and the plant can benefit from good pollination.

Benefits to growers from insect pollination come principally from higher yields through more pods per plant, more seeds per pod and higher rates of germination of resultant seed. Additional benefits may be increased set of early pods, leading to earlier ripening and easier harvesting. In spite of the attractiveness of its flowers to insects, canola might still have good seed yields without insect pollination, but this depends on environmental factors. Hence there is a degree of controversy over the need for insect pollination of canola.

It is best practice to introduce honey bees for the pollination of all canola varieties, unless it has been shown that the variety does not benefit from honey bee pollination. Some studies have recommended three hives per ha, while some others recommend as little as one hive per pa, but distributed evenly around the crop. Further information from Canada indicates the need for larger numbers of bee hives for the pollination of hybrid canola seed, where stocking rates of six hives per hectare have been reported. These higher stocking rates may reduce honey produced by as much as 75 per cent as the main aim is to maximise seed production. 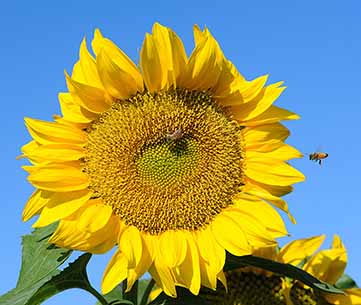 Sunflower (Helianthus annuus) is a summer-growing plant native to North America which has been grown for many years both under irrigation, and in summer rainfall areas of Australia (Queensland and New South Wales).

Commercial sunflower cultivars are almost entirely made up of a stalk with one main or primary flower head, however, non-commercial cultivars may have several heads. Depending on the cultivar and size, the main head may contain from 1,000 to 4,000 individual florets, with a secondary head containing 500 to 1,500 florets. The outer or ray florets with the showy yellow petals are sterile, having neither stamens nor pistil. The less conspicuous florets making up most of the head are hermaphroditic (having both male and female reproductive organs), but protandrous (having male sex organs mature before female sex organs), and many are self-incompatible. They are normally open for two or more days. The first day, the anthers release their pollen in the anther tube, which is partly exerted from the corolla. The pollen is collected freely by bees, along with the nectar at the flower base. The second day, the stigma pushes up through any pollen mass remaining, then its two lobes open outward, receptive to pollen but out of reach of its own pollen.

Most sunflower cultivars are self-incompatible meaning that for successful pollination, pollen must come from another plant. However, if pollen from a floret is transferred to the receptive stigma of another flower on the same head then seed will set. When self-pollination (within the same head) occurs, seed set is usually low, the seed undersized, and oil content and germination are reduced. Several studies comparing seed yield and weight in sunflower heads exposed to bees and heads bagged to exclude bees have demonstrated the importance of bee pollination in the sunflower industry. These studies have found a significantly greater seed set and seed weight in flower heads that were exposed to bees compared to those that were not. Other studies have also found greater seed numbers and weight in exposed heads but no significant differences in oil content between bagged and un-bagged heads.

Several different recommendations have been given in the literature with regards to the number of hives required per hectare and would depend on the density of plants within a given crop. However, recommendations of 3–5 hives per hectare have proven to be successful during pollination trials, however, other studies have shown that these colonies need to be evenly distributed throughout the paddock to achieve optimal pollination outcomes. 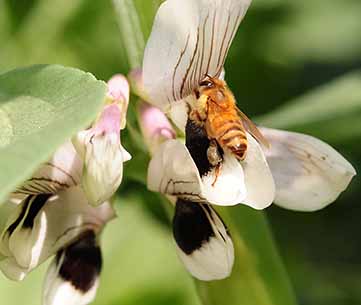 Faba bean (Vicia faba) is a winter-growing pulse, or food legume crop. Faba beans were originally used in Australia for livestock nutrition. However, faba beans are gaining in popularity as an important rotational crop in cereal-based farming systems, and also in cotton rotations, because they assist in the control of cereal diseases (especially root disease), nematodes, and weed control through use of a different spectrum of herbicides and through the fixation of nitrogen. They fix more than 80 per cent of their own nitrogen needs under a wide range of conditions. In addition, faba beans are a relatively high-value product and are exported to major food markets in the Middle East with Australia being a major exporter.

Pollination has consistently been identified as a major limiting factor to higher, more reliable seed yields and improved seed quality in faba beans. Numerous studies have shown the value of honey bees as pollinators of faba beans in Australia and overseas. Only 40–50 per cent of the flowers need to be pollinated to provide an excess of pods for the plant.

There is a significant body of research to indicate that honey bees (Apis mellifera L.) play an important role in the pollination of faba beans. Honey bee activity has been recognised as contributing to pollination in faba bean crops in Australia, although the introduction of managed honey bees into a flowering crop of faba beans has usually been thought unnecessary in Australia due to sufficient feral honey bee activity. However, numerous recent trials have found that honey bee pollination significantly improved the number of pods and yield of seeds of faba beans, and for this reason, faba bean growers are being urged to bring in honey bee hives for pollination.

Additional fact sheets and web links about pollination of grain crops  are listed below. Please be aware that some of the information was developed overseas, and environmental and seasonal variations may occur.

Bees on canola: what are the benefits, Manitoba Department of Agriculture, Food and Rural Development, Canada

Bees and canola: a sweet relationship, Canola Council of Canada