Apple and Pear Australia (APAL) represents the biosecurity interests of apple and pear producers and the industry.

There are approximately 550 commercial apple and/or pear grower businesses in Australia. Victoria produces 46 per cent of Australia’s apples and 88 per cent of pears, with the remainder of the gross production divided evenly across the remaining states.

The major production areas include the Goulburn Valley, Gippsland, Yarra Valley and the Mornington Peninsula in Victoria; Stanthorpe in Queensland; Batlow and Orange in NSW; the Huon Valley and Tamar Valley in Tasmania; the Adelaide Hills in SA; and Donnybrook, Manjimup and the Perth Hills in WA.

Packham and Williams are the most common pear cultivars grown, plus smaller areas of Beurre Bosc and Corella. New cultivars include ANP-0118 (Lanya™), ANP-0131 (Rico™), and Piqa Boo™. The main pear export markets are New Zealand, Indonesia, Canada and Singapore. 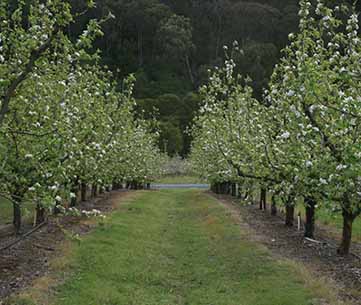 Apple (Malus domestica) flowers have five stigma surrounded by anthers. The ovary has five carpals, each with two to four ovules. An apple may therefore have between 10 and 20 seeds depending on the variety. Each group of flowers has a main flower called the king bloom which opens first and usually produces the best fruit if pollinated.

Most varieties of apples are not self-fertile and need pollen from another variety. Flowers that are not pollinated are soon shed by the plant. If apples are not adequately pollinated, especially if only the ovules on one side of the flower have been pollinated, the resulting fruit may be misshapen.

Apple pollen can be carried in the wind; however, trials suggest that this is usually not significant for pollination. Apple flowers are mainly pollinated by insects. Although a large number of insects visit apple flowers, honey bees are usually the most important pollinators and should be introduced to orchards. Studies have shown that the more bees recorded on flowers, the higher the fruit set. 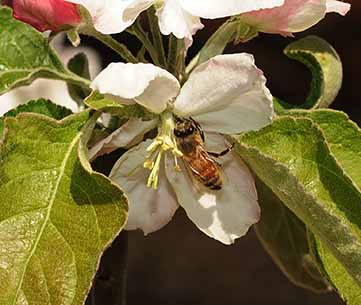 The flowers of most varieties of apples are attractive to bees. They flower early in the spring, so there is often little competition from the flowers in the vicinity of the orchard. As most varieties are not self-fertile, they must be planted with a polliniser. Good advice should be sought when choosing a polliniser as it has to flower at the same time and not be too closely related to the trees being pollinated. The best distribution would be to have a polliniser in every row, as bees are more likely to move up and down rows than between rows. This is usually excessive; however, as too much area has to be devoted to pollinisers. A good compromise between pollination and the area devoted to pollinisers would be to have the polliniser as the third tree in every third row. In this arrangement every polliniser is surrounded by fruiting trees and every fruiting tree is next to a polliniser tree in the same or next row. To achieve the best pollination, the polliniser should be offset so they are not in the same position in every third row.

As it is not usually necessary that every apple flower is pollinated, hives are not usually introduced until after 10 per cent flowering, to ensure there are enough flowers to encourage the hives to forage in the orchard. Pollen-collecting bees are better pollinators than nectar-collecting bees, as they have greater stigma contact. It may therefore be worth managing hives to promote pollen collection, by ensuring they have a lot of brood and are fed sugar syrup or have pollen traps fitted.

Stocking rates between one and 12 hives per ha have been recommended however four hives per ha is quite common. 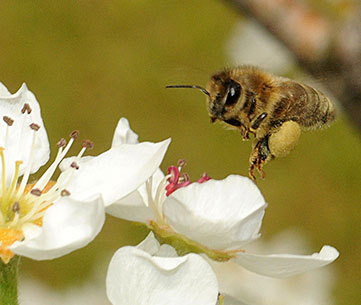 Most varieties of European pears (Pyrus communis) are not self-fertile. The flowers have five stigma and ten ovules. If few of these ovules are pollinated, the fruit may be misshapen. Honey bees are the most important pollinators of pears, but they do not find the flowers very attractive. Pear flowers produce relatively large amounts of pollen but little nectar. The sugar concentration is low and hence not very attractive to bees. For this reason, pear pollination with honey bees can be difficult.

Because of the low amounts of weak nectar, bees introduced for pollination are readily attracted to flowers surrounding the crop.

There are a number of tools that can be used to maximize the number of bees visiting pear blossoms. This includes:

Nashi pears (Pyrus pyrifolia) have white flowers with five petals. Most varieties are self-infertile, and a compatible pollen donor needs to be inter-planted. European pear pollen will also successfully pollinate nashi flowers if they flower at the same time. When the flower opens, the anthers are pink and folded inwards towards the five stigma in the centre of the flower. They then open out and the outside ring of anthers dehisces on the first day. The inside ring of anthers dehisces on the second day. The dehisced anthers turn black.

The flowers are visited by honey bees to collect both nectar and pollen. The flowers smell like rotting fish and also attract flies that probably assist with pollination. Pollination can be difficult because the trees flower early in the spring and the flowers are not particularly attractive to honey bees.  The fruit usually have four to eight carpels, with each carpel being able to produce two seeds. Increasing seed numbers usually results in larger fruit. Poor pollination and an uneven distribution of seeds around the fruit result in misshapen fruit. Two to five hives per hectare are recommended for pollination however eight hives per hectare are usually used in New Zealand. Pollen foragers are likely to be better pollinators than nectar foragers, so colonies should have a high brood/bee ratio and possibly be fed sugar syrup.