Onions Australia represents the biosecurity interests of onion producers and the industry.

Onions are grown in most states, but SA and Tasmania together produce 66 per cent of the Australian crop. Key onion production locations are the Lockyer Valley in Queensland, north-eastern regions and the Adelaide Plains of SA and the Devonport–Launceston region of Tasmania. The total area planted to onions is largest in SA, as is the average plantings per farm.

The main type of onion grown in Australia is the traditional brown onion, which accounts for 79 per cent of fresh production. Onion production is during late spring, summer and autumn. Planting starts around April through to September, harvesting from August to March, and storage supplies the market for the winter months. 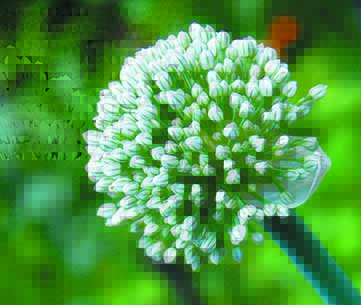 Onion (Allium cepa) flowers consist of a spherical umbel made of florets that are less than 5 mm in length. The florets have six stamens, a single style and an ovary with two ovules. It takes about two weeks for all the florets on an umbel to open completely. Most of the pollen is made available on the first day and the remainder on the second day. The pollen is shed before the stigma becomes receptive. Pollen viability declines quickly after the floret opens. The stigma of a flower may still be viable for up to 6 days after it opens. The flowers are self-fertile so pollen from one floret can pollinate another floret on the same umbel. Where male-sterile lines are used for seed production, pollen must be moved between umbels for pollination.

The flowers are visited by a range of insects that collect pollen and nectar. They produce enough nectar that beekeepers can occasionally collect a honey crop if large enough areas are planted. 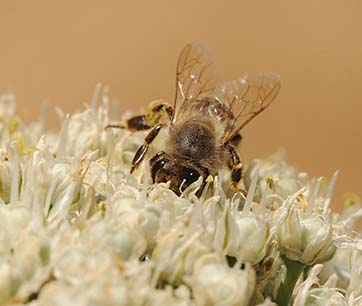 Flies have been used for pollination of onions in breeding trials but for commercial production of onions, honey bees are usually the only option. Honey bees will visit onion flowers to collect both nectar and pollen, but only nectar foragers will visit both male-sterile and male-fertile lines in hybrid onion production.

Because only bees foraging for nectar will visit both male-fertile and male-sterile lines, colonies introduced to onion fields should have large numbers of adult bees and should not be fitted with pollen traps or be fed with sugar syrup, as both these methods promote pollen collection at the expense of nectar foraging.  Usually bees do not find onions very attractive and they can be easily drawn away from them to other surrounding crops. For this reason, high colony stocking rates are recommended. Rates in excess of 30 hives per hectare have been suggested.