Avocados Australia represents the biosecurity interests of avocado producers and the industry.

In 2017–18, avocado production was valued at $350 million (LVP), with exports valued at $11.6 million, which were mainly shipped to Malaysia and Singapore.

Queensland dominates Australia’s avocado production, followed by WA, NSW, SA and Victoria, with a small amount of production in Tasmania and one known orchard in the NT. This geographic diversity in growing regions ensures domestic access to Australian avocados year-round. Fruit imported from New Zealand supplements supply during spring and summer.

Other varieties such as Reed, Sharwil, Gwen, Wurtz and Fuerte make up the balance. 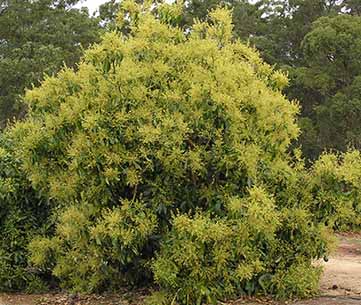 Avocado (Persea americana) trees can reach 18m high, but they are usually between five and nine metres in height. Trees can appear completely covered with flowers. In New Zealand and Australia flowering is typically spread over six to eight weeks. The flowers are small and inconspicuous (10 mm diameter) and contain a single stigma surrounded by six anthers. The stigma becomes receptive when the flowers open.

The flowers are usually open for 2–6 hours, then close and open again for 2–6 hours on the second day. When a flower opens for a second time, it produces pollen and the stigma is not receptive.

The flowers then close and remain closed. Flowers in their female phase can be recognized by the anthers, which lie flat along the petals. When the flowers are in their male phase, the anthers stand upright and flaps open at their tips to expose the pollen. Flowers will usually be one sex in the morning, closed in the middle of the day and the opposite sex in the afternoon. The timing of the sex phases can be quite defined, but environmental conditions will affect the timing and duration of the male and female phases.

Avocado cultivars are classified in two groups (A or B) based upon their flowering behaviour. In the type ‘A’ cultivars, the female organs are receptive to pollen in the morning and the pollen is released in the afternoon. In the type B’cultivars, the pollen is released in the morning, while the female organs are receptive in the afternoon. Type A cultivars include: Hass, Gwen, Lamb Hass, Pinkerton, Reed, Gem, and Harvest.  Type B cultivars include: Bacon, Ettinger, Fuerte, Sharwill, Sir Prize, Walter Hole, Zutano, Marvel and Nobel. Both type A and B cultivars are often planted in orchards to allow cross pollination. In New Zealand, some orchards are planted solely with the fruiting variety Hass. How these are pollinated is unclear. It is likely that there is sufficient overlap in the opening times of male and female phase to allow pollen transfer between flowers on the same tree.

Studies in New Zealand and Spain have shown that hand pollinating flowers can significantly increase fruit set. Typically, fruit set can be increased from less than 0.3 per cent to more than 5 per cent.  This suggests that the fruit set in some orchards may be limited by inadequate pollination. The reasons of this sub-optimal pollination have yet to be established. They may be in part due to orchard design. 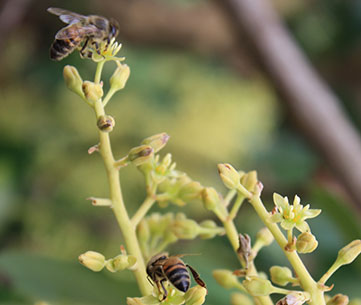 Although there is only one seed in an avocado fruit, more than 20 pollen grains need to be deposited on the stigma before a flower will produce a fruit. The trees are normally planted with large gaps between trees when they are young.  However, pollinators such as honey bees tend to move from a flower to the next closest flower so they will probably not readily move between trees. As the trees grow larger, the gap between trees decreases. Although this will probably increase the movement of pollinators between trees, the pollinators are less likely to move completely around a tree.

Pollination usually requires an insect vector. In Central America the avocado is pollinated by social bees (Meliponinae) and wasps (Vespidae). In other regions of the world, honey bees (Apis mellifera) are the main pollinators. In parts of Australia, large numbers of hover flies visit avocado flowers. Their importance as pollinators has not been measured. The timing of honey bee introduction is important because avocado flowers are not highly attractive to honey bees. Hives should be placed in the orchard when flowering is at 5–10 per cent. This will encourage honey bees to exhibit fidelity to the avocado bloom.

Flowers in both their female and male phases produce nectar. However, as insects can collect pollen only from male flowers, only nectar foraging bees usually visit both female and male stage flowers and contribute to pollination. Honey bees only collect small pollen loads but may collect enough nectar to produce a honey crop for the beekeepers if there are sufficient trees. As only nectar foragers pollinate avocado flowers, colonies should be prepared that have a high demand for nectar. Two, eight and 10 hives per hectare have been recommended however rates between five and eight hives per hectare are common. 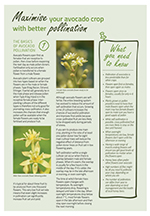 The value of pollination, Avocados Australia

The mysteries of the avocado flower (video), Plant and Food Research