Raspberries and Blackberries Australia are members of Plant Health Australia and represent the biosecurity interests of rubus growers (including raspberries blackberries) and the industry.

While most raspberries, blackberries and brambleberries produced are consumed locally, berries are also exported to Singapore, Hong Kong, India, Indonesia and Pacific Island countries. There is approximately 700 hectares of land under cultivation with rubus varieties: production is largely under protected cropping (white plastic tunnels) to protect from wind and rain. New plantings continue in response to increasing demand from consumers.

Production is expanding in newer areas such as Gin Gin, north of Perth in WA, and Stanthorpe, south-east of Brisbane. 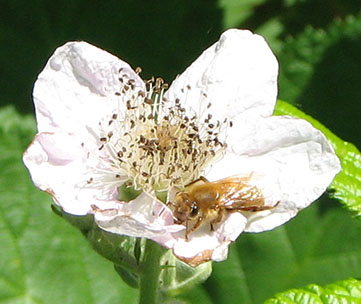 Rubus is a large genus of flowering plants from the Rosaceae family, subfamily Rosoideae, of which there are believed to be hundreds if not thousands of species as well as hybrid species created both in nature and artificially. Most of these plants have woody stems with prickles, spines, bristles and gland-tipped hairs which are often referred to as brambles. Bramble fruit are generally separated into two groups, raspberries (Rubus idaeus L), and cultivated blackberries (Rubus subgenus Eubatus).

Cultivated blackberries come in a number of different varieties which vary in growth characteristics, fruit size and shape and include but are not limited to varieties such as blackberries, boysenberries, youngberries and loganberries. On the other hand, most commercial raspberry varieties are of European origin but some have been developed from hybridisation with native North American varieties (Rubus strigosus).

Raspberry and blackberry cultivars range from completely self-fruitful to completely self-unfruitful with most erect blackberries being fruitful yet prostrate growing cultivars often requiring cross-pollination. Because rubus berries are made up of an aggregate of druplets (each druplet only forms after its pistal has received pollen) yield and fruit quality can be significantly improved from honey bee pollination. Nectar is secreted in large amounts from blackberries and raspberry flowers and both nectars have a high sugar content that attracts an abundance of pollinating insects, especially the honey bee. For both raspberry and blackberry fruit size, shape and number are good measures of the degree of pollination. Numerous studies have shown increases in yield and fruit quality when bees are brought into a berry crop during flowering. 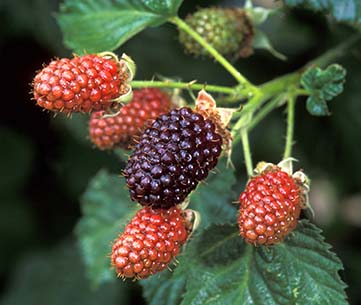 Blackberry (Rubus sp.) flowers are usually white with four petals. The stigma are surrounded by 50 to 100 anthers. Nectar is produced in a cup at the base of the petals. They start producing nectar as soon as the flowers open and continue until after the petals have fallen. There are a large number of varieties of blackberry with different degrees of self fertility. It has been suggested that several different cultivars should be planted to ensure cross pollination. Certainly, if planting blackberries, advice should be sought as to whether the variety being considered needs cross pollination. They probably all benefit from bee visits to spread pollen to the stigma. As an example of this, the cultivar Thornless Evergreen is self-fertile but honey bee pollination results in better yields. The stigma are receptive for the first three days the flowers are open. Honey bees visit blackberries to collect both pollen and nectar. The flowers are usually attractive to bees and beekeepers can at times collect a honey crop from wild and cultivated blackberries.

Because blackberries are very attractive, there may be sufficient insects visiting flowers without introducing beehives. However, for commercial production the low risk approach is to introduce beehives unless it has been shown that they are not needed. It has been suggested two hives per hectare are sufficient for pollination. Because the flowers are usually very attractive to bees, they can be introduced at the start of flowering.

Raspberry (Rubus sp.) flowers have five petals and a ring of anthers. The flowers have many ovules, each with its own stigma. The fertilised ovules are called drupelets. The flowers are partially self-fertile. They will produce some fruit when caged to exclude bees, but will produce more and much larger berries if bees have access to the flowers.

The stigmas are receptive before pollen is liberated by the anthers. Because of this, the first pollen to reach the stigma is likely to be from other flowers on the same or other plants. Once the anthers start to release pollen, it may be transferred directly to the stigma and thus self-pollination will occur. The flowers can still set seed 4 days after they open. When pollen was applied each day for 4 days after the flowers opened, the seed number increased after each pollen application. This suggests that not all the stigma may be receptive on the first day. The degree of pollination affects not only the number of fruit but also the fruit size and shape. There is usually an increase in berry size with increasing number of drupelets. Increasing pollination will also decrease the number of malformed fruit. It has been suggested that some crosses between different varieties may result in larger drupelet size.

The flowers produce relatively large amounts of nectar. They have been reported to produce an average of 17 microlitres per day, which is between two and 10 times the amount reported to be produced by apples. Because of this, raspberry flowers are usually very attractive to bees. Honey bees will also collect small loads of pollen from the flowers. Pollen is not particularly attractive to bees and they will discard it at times. The attractiveness of the crop will usually mean that fewer colonies will need to be introduced. It is suggested in the literature that between 0.5 and 2.5 hives should be introduced per hectare.  Because the flowers produce relatively large amounts of nectar, bees may need to visit fewer flowers to collect nectar and may not spread evenly through a field. If an uneven distribution of bees is noted, more hives should be introduced and spread around the crop.